Omegle.com allows people from around the world to converse with each other “anonymously”. It is one of those sites that let you start a text or video chat with someone online and consequentially makes you doubt the intelligence of man kind. On sites like this, text chat follows the famous “Greater Internet Fuckwad Theory” and the video chat is… Well it’s probably a phallus. Omegle started as a way for strangers to connect and talk with each other, but has since devolved and the chance of finding some meaningful conversation on it is minuscule which is a shame because random chatting is a fun concept. I would add a premium feature that administers an IQ test and matches you to someone according to that but that is an idea for a different time.

When I first discovered Omegle I quickly got tired of trying to find someone to talk to. The idea of Omegle is not new or revolutionary. IRC and chat rooms were there before but this made it as easy as can be. Since I already spent a ton of time in online social communities with people who have the same interests as me I dismissed it as a cost efficient way of communicating. I did find a use for Omegle though – there was nothing preventing me from spying on a random conversation and recording it. A nice challenge and it seemed fun. This was years before Omegle itself introduced the “Spy mode” so I guess there is something there. The concept of Spy Mode might look like something “evil” to do – spying on other people’s conversations is an ethical gray area in the real world, but is it online?
The answer to this question depends on how much you know and are aware of privacy online. In theory everything you do online can be (and is) monitored by a number of entities including your ISP (that can read all of your online activity), your operating system and other programs on your machine, a lot of routers on the Internet and at least a few governments. That is all beside the point – I thought about ethics for a second but to be honest I don’t see this as anything but a technological challenge (also, it isn’t illegal per se). My goal wasn’t to spy on people but to hack a bot together and as such I probably only ran the finished script once – to make sure all the bugs were solved. I call it the Hacker’s Mindset :).

This is how OmegleBot was born. A simple and a very quick and dirty and unrefactored python script. Before that script I didn’t have a lot of knowledge about HTTP, httplib and urllib because I used raw sockets to talk HTTP (poorly) in the past. This was a perfect project to help me understand the python libs relating to HTTP and JSON. The bot opens two simultaneous connections to Omegle and sends them both a simple greeting, “asl?”, which is the way most conversations in chat channels start. It then proceeds to proxy their conversation and also record it into a text file. The most interesting part is the post function. It started as a simple call to connection.request and evolved to include a variety of HTTP headers including a faked user-agent and referer needed to defeat some of Omegle’s “security checks”. Usually services will have more server side security checks (“never trust user input”), but unfortunately Omegle doesn’t have a choice here. Because they are open and allow anonymous chatting it leaves them with only so many ways to ensure I’m a client and I masqueraded as one well. Omegle uses the JSON protocol to pass data about events like whether the other user is typing, the message the user sent and of course when a user disconnects. Reverse engineering it was the hardest part of this project (and it wasn’t all that hard). I think the only challenge I faced was understanding why Omegle blocked the first iterations of the bot and adding various headers until I passed for a client in their book.

I also attached a sample output file with a few conversations. There is nothing interesting there nor did I capture anything interesting. All the conversations are very short which is definitely a symptom of Omegle – long and meaningful conversations are few and far between. I even sent “typing” statuses every few iterations to encourage people to converse and it didn’t help.
What can we learn from this? Masquerading as a browser is easy. Writing bots is easy. As a person on the internet you should take from this that bots are everywhere on the web. You should be aware of that because a lot of spam and fraud is done by bots – you can trivially change this bot to spam

P.S. Unfortunately the bot stopped working. It can be that Omegle changed the protocol a bit, added some more security or that I have a bug. Feel free to fork it and bring it back to life!

Update: A challenger appears. My security researcher friend Fox has challenged me to a duel. See her blog post for the details.

This is part of the Reflection series in which I go through my old projects and tell their story.

CAPTCHAs have become an integral part of the web in the last few years. Almost everyone on the web has encountered those twisted pictures, probably when signing up to an email service. They come in various shapes, sizes, colors and cats. When they first became popular, there was an explosion of different types of schemes that services used (who can forget Rapidshare’s cat captcha?).
Now as with every security measure there is a compromise between usability and protection. Some of the easier CAPTCHAs were broken using only OCR software, while some of the latest reCAPTCHA images are hard even for a human to solve (interesting but out dated chart).

One such service was UrlShield. You would give UrlShield a URL you want to protect from bots and it created a page with a CAPTCHA that when solved correctly redirected you to your original URL. Simple enough. I can certainly see a use for such a service, for example if you want to give out promotional coupons and don’t want bots to snatch all of them. The service became popular in some file sharing sites for the same exact reason.
The particular image this site was generating had a checkerboard background with 4 characters all in different colors, sometimes overlapping. It was pretty easy for a human to parse it. 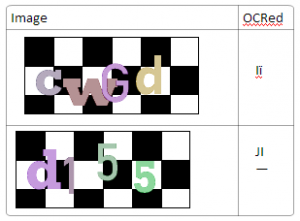 It even works pretty good against OCR. I used Microsoft OneNote OCR feature which uses the commercial OmniPage software to create the second column.

So far so good? Well, no. This scheme is flawed because it is easy to transform the image – remove the background and segment it (split it to region that each contains a single character), allowing OCR tools to easily get the letter. To remove the background you just clear all the black pixels out of the image. To segment it all you need to do is choose one color and mask all the others, which means you’ll end up with a single letter, as each letter is in a different color. This is what you end up with: 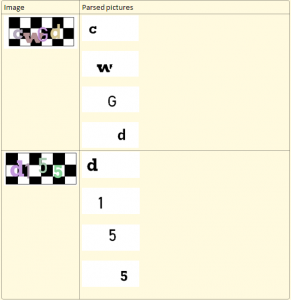 OneNote has no problem parsing each of these to a letter.

The process described above is exactly what UnUrlShield does. It’s a simple Python script that use the Python Imaging Library to read the image. Then it counts all the colors that appear more than a certain threshold (MIN_PIXEL_PER_LETTER_COUNT) and saves each color’s pixel location. Lastly it goes through the colors, creating an image with only that color’s pixel locations.

Is there a lesson here about CAPTCHAs? I think so. UrlShield is now some kind of ad/malware site. Even complicated CAPTCHAs can be broken, or even better – be defeated by side-channel attacks like having an army of low-cost workers break them on-demand (The comments of this article are a treasure trove of irony) and sometimes people are even fooled into breaking CAPTCHAs. This is why it amazes me they are still around, annoying normal regular people while also being broken by even slightly motivated attackers.
Are there no solutions to spam? Of course there are! In fact gmail does a great job at stopping 100% of my spam using things like blacklisting known spammers, Bayesian filtering, “crowd-sourcing” protection (the “mark as spam” button) and other tools that don’t rely on CAPTCHAs.

Do you have good examples of silly, easily broken or bizzare CAPTCHAs? Did you find an easy way around some services blocked by CAPTCHAs? Leave a comment below and tell me about it! 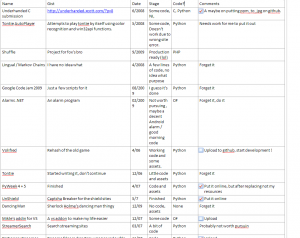 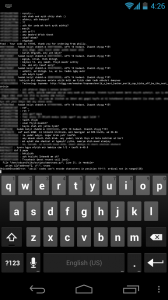