This page contains a list of cool projects, open source contributions and talks I’ve given.

Chosen because I’m especially proud of them or like them:

An iPhone game of Four In a Row I wrote after getting released from the IDF (September-October 2009). The game was written mostly in a week, and then was polished for a month, including great graphics from a friend.

The Tel Aviv branch of the GDG user group – the second largest after GDG San Francisco – with 2500 members and tens of events.

Open source project I created in the early days of Trello that used card due dates to create an iCal feed you can subscribe to and see the upcoming cards in your calendar. It had about 1500 users at its peak but is now deprecated as Trello finally added that feature.

Alternate reading list to Pocket’s (previously read it later) that skips their “Article View” and goes straight to the article. It evolved to a nice UI for it that I greatly prefer over theirs.

A screenshot of the Pocket Skipper app.

Made during the 2012 conflict between Israel and militants in the Gaza Strip this shows the missile attacks on Israel on a map. It was made during one day and is now deprecated as during the most recent (2014) conflict other people have taken over and created more apps. 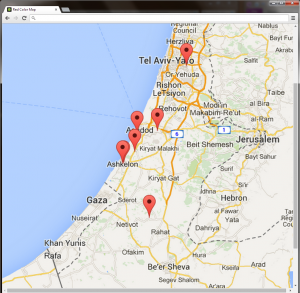 A screenshot of the red color app.

Add-on for the Mousetrap Javascript library that generates beautiful help lightboxes automatically from your keybindings.

Two punching dummies we rigged with pressure sensors and connected to a game of Mortal Kombat. Two people can then spar with the dummies while controlling their Mortal Kombat characters and fighting one another on screen. Made during three intensive days.