tl;dr – I wrote an app that creates a feed that you can plug into your calendars out of Trello cards with due date. Update: That was two years ago and since then Trello finally added that feature, and users migrated to using Trello, so I took it down. RIP 🙂

Almost a year ago Fog Creek Software released Trello a flexible web based to-do list tool that can also be used as a project management tool. Because of its flexibilities Trello has been used for many use cases – software release processes, customer relations management, book authoring and much more. I started using it at launch because I hate every other to-do list tool, and I tried many, but I instantly fell in love with Trello. It was easy to use and got out of my way, which is something other to-do lists just didn’t get. I was hooked since and started getting others to use it to plan things with me. I use it to manage pretty much everything, including the backlog of features to this blog, development tasks for zAnti, the app I’m responsible for at Zimperium and more. The only thing that was really missing from Trello was integration with my calendar. It was a major pain point. Trello cards (the basic to-do items) have only one way of connecting them to time and date – a “due date” value that changes colors when the date passes. One of the most requested features was to have calendar integration. 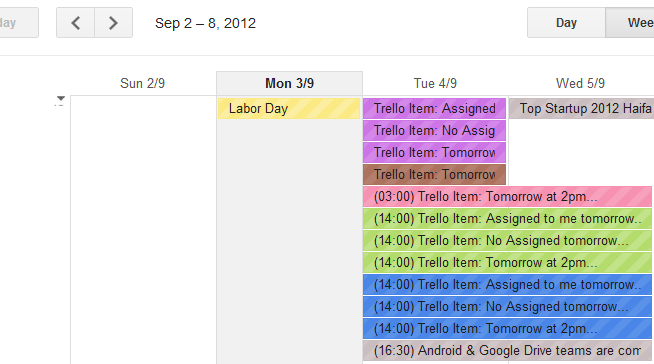 When the Trello API was out I immediately knew that my first priority is integration with my Google Calendar. I started playing with the API and making the basic PoC (Proof of Concept) for an app that created an iCal feed from Trello cards with a due date. Using iCal was the best option as it is supported by every calendar program worth its salt. I than left the code alone for a few months because lack of time and general tendency not to finish things. At the end of July I decided it’s time to productize this and I wrote the first version of the “Trello to iCal feed app” which is up now. I am still adding features to it and changing stuff, but it works and seems stable. The source code can be found here. I will make a separate post about the design and code of the app sometimes this week when I finish updating to a new version. Definitely learned a few interesting things.

One amusing thing that happened is that between the PoC and the productization another developer (François de Metz) added this feature to his app. Three months ago his app only showed you your cards on a basic calendar he created without any integration to outside calendars which wasn’t helpful to me, but he since he added a way to get an iCal feed. We both even used Twitter Bootstrap so our sites look pretty similar. This coincidence isn’t magical though – Bootstrap is popping up everywhere and it’s easy to deploy, but I think I’ll steer clear of it in my next projects. I’ve had some problems with LESS support on windows and I’ve also seen some backlash and lack or trust from developers when they see a vanilla Bootstrap site.

If you have any feedback and comments you can use this Trello board (how meta) or just contact me using the usual methods.